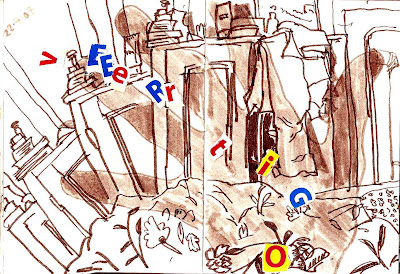 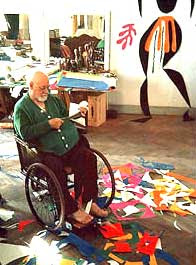 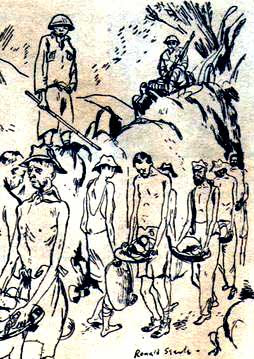 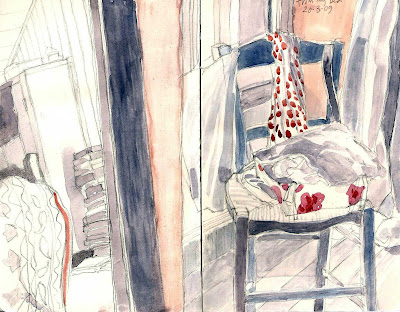 Though I have procrastinated with the best of them, I do agree with that comment: if we truly want to draw/paint/write, we will find a way to do it.

I used to have lots of sympathy for people's excuses but now i don't!

Love your work and was pleased to discover your blog by some round about route.

Thank you for that, SJ. I sometimes wonder if there's anyone out there!
I have lots of different ways of persuading people (including myself!) to draw more. I think a lot of reticence is due to fear of failure, but the more we do, the better and easier it gets.

Oh yes - I think you're right about the fear of failure but we all have that don't we? I've met mature artists, who just before exhibitions suddenly start panicking. I feel full of it everyday. The fear is understandable, but I think if someone really wants to do it they will do it even though they are scared. Being willing to tolerate discomfort is what allows us to grow - in any aspect of life. And like you say we can use strategies to encourage ourselves.

This turned into a longer comment than I meant, oh well!

You're right- I still feel nervous, and have a sense of humility before starting a work. I think that's a good sign- it doesn't do to feel over-confident and absolutely sure of the results we want- that way, we're blinkered from the start.
How much like life is Art!

Do hope you're feeling a bit better soon-your comments always do me good and spur me on-an example to us all! All those years I wasted farting around making excuses...! Will have to try and make up a bit in the next 30 years-luckily I come from a strong northern line of long-livers-must be something in the coal dust..
Keep up your news
love Sue

And you never mentioned Frida Kahlo, who suffered from polio, was injured in a crash between a bus and a tram and thus suffered a lifetime of back pain and had to contend with a stormy marriage and a fierce set of eyebrows.

And I wholeheartedly agree with what you say about excuses; you can find the same sort of thing in other aspects of life such as people who lose limbs going on to run marathons and climb mountains. It's also said that, if you want something doing, ask a busy person.

Thank you, Sue, I'm almost better now and started a new piece of work yesterday.
You're definitely not starting from scratch, though, with your paintings- you have a lovely sense of colour and design- and the drawing's good, too.
Being the samr age as you..thirty years left, you say- wow! I thought I only had twenty.. thanks for the extra time!!
Stu and Gab, thank you for your comment,and the extra info- yes those eyebrows must've been a handicap.. how did she see though them? I had to leave a lot of artists out of my list which would've been endless had I included all the ones who were completely doolally!

I just found your blog through Urban Sketchers and I'm having a great time going through all your posts. This one spoke to me loud and clear...no more excuses!

Thank you, Raena, I still need to give myself a kick up the proverbial now and then!