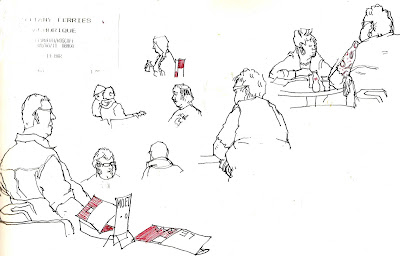 On the ferry, English Channel

It feels good to be back in one's own country and last time was no exception. In May we sailed from Roscoff in Brittany to Plymouth in England and journeyed to our homeland in the north via the motorways M5 and M6. Early summer was upon us, with the elderflower just in bloom, small farms on the hills and red-brick towns like rashes across the landscape, their chimneys coughing smoke. Here and there, the tower of an ancient church rising from the trees evoked an earlier, less fickle age. 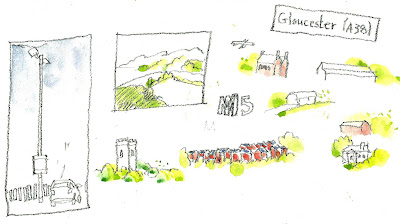 We went to the private view of an exhibition at the Calder Gallery in the old industrial town of Hebden Bridge, now generally cleaned- up and very arty and touristy .. we arrived early and to while away the time we were forced to have a cream tea and sit by the river watching the ducks. Quel dommage! 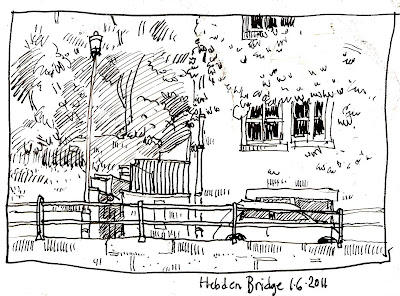 Earlier that week I'd had the opening of my solo exhibition 'The Secret World of the Ordinary' at the See Gallery in Crawshawbooth. "Where the hell is Crawshawbooth?" I hear you ask- well, it's:

" a small village on the edge of the Pennine Hills in England just north of the market town of Rawtenstall, Lancashire, and just south of Loveclough It is part of the valley of Rossendale, an ancient royal hunting ground. The majority of surrounding land is farm and moor land and
many walkers come to the area." 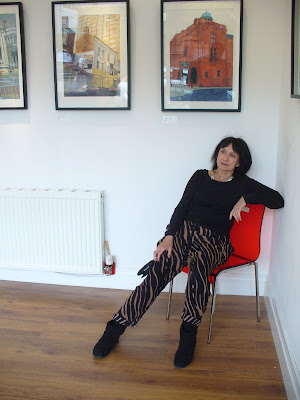 For me, Urban sketching has a parallel in urban painting, and this is mainly what the exhibition is about. Thank to the tender ministrations of Mr. Price, we had some great publicity for the show:

The See Gallery is a wonderful place to exhibit and the 'galleristes' are human and approachable. You have just under a week in which to visit, and to claim a cup of tea when you tell them I sent you!

(My many thanks go out to to Julian and Jackie, to our friends and family, and to everyone who came along to the show.)