How To Waste Money 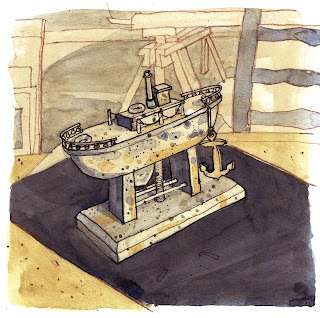 I call in at the studios to measure up the big table we've got, to see if it'll fit in my workroom at home.

Paddy's there, with his open-air head and Cornish twinkle. He invites me into his space to look at a new painting- it's a wide landscape with one of his big skies.

The room's full of stuff and I admire a little faded and worn wooden boat lying wrecked on a heap of debris. He kindly gives it to me... “ I found it in the road,” he says, “Just lying there.”

The boat's fitted with an ugly plastic holder for a bulb and he donates the remains of a lampshade to go on top. “I'll re-cover that.” I say, knowing I won't.

When I get home with my treasures, Mr. Price agrees that the bulb-holder must go and offers to remove it, slashing his finger with a blade in the process.

I send off for a new holder, nicely retro with a touch of the trendy industrial. There's a plug and real fabric cord- none of your plastic tat! and I can use one of those bulbs where you can see the filaments. “The ones that make it look darker” quips Mr. Price.

Anyway, think I, it'll look really cool on the French cupboard and, when we're allowed, visitors will gaze upon it in admiration.

It comes the next day. Oh no, it's enormous, almost half as big as the boat! It'll look really stupid! I'm disappointed- I might as well have taken a match to a fiver and a tenner! 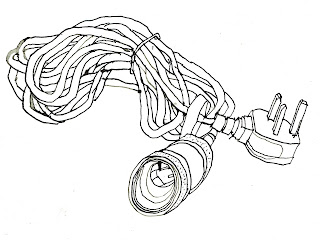 After unsuccessfully hanging it in various places round the house- I consign it to a drawer.

It'll come in use sometime. '!It's bound to go somewhere!'

Posted by Caroline at 17:30 No comments: