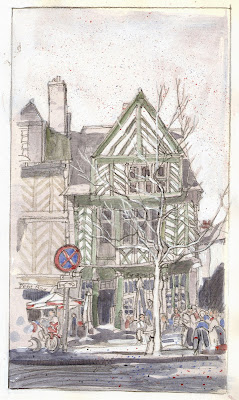 We have younger French friends who live in and around Rennes. This is thanks to Mr. Price's musical 'bent' and his rock band members.
Some of them have lived in the medieval quarter, in buildings with narrow twisting oak staircases and sloping wooden floors. The rue St. Michel, for example, with its half- timbered buildings set at jaunty angles to the perpendicular. These would have belonged to affluent merchants and craftspersons- and I'm not talking cute pottery frogs here, or a hand-crocheted toilet-roll cover!
Elodie and Fred's large room on the first floor overlooked the street through long, wide windows made up of small panes divided by wooden mullions and lead glazing bars. Or muntins as I just found out.....
Everywhere here was built of oak- floorboards, partitions, ceiling, which gave a feeling of being on board an old galleon, or in the heart of a forest, protected by trees.
Contrast this, then, to the uncompromising high-rise apartments which pierce the skyline of Rennes. 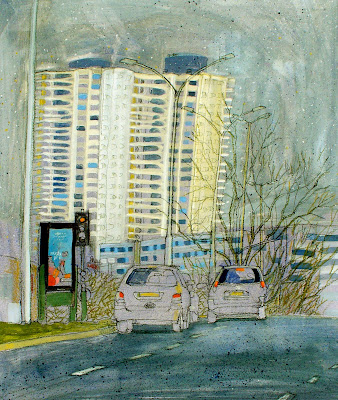 In England, living in a block of flats often carries with it a stigma, the cheerless vision of graffiti-scarred, pock-marked stairwells with the heady reek of urine. Not so for our Gallic friends! It's acceptable, even desirable to live in the town where you work. I know a doctor in Rennes whose collegues found it curious- and- laughable when he bought a farmhouse in the countryside a whole fifteen-minutes' drive away.
Inside and out, these French 'grandes immeubles' are bright, clean and well-designed.
Unmistakable among them is the thirty-storey 'Les Horizons', built in 1970 and designed by Maillols. The facade is waves and troughs, light and shadow and, in the evening, when the lights come on in the flats, they make oval shapes.


We've been invited to dine on Saturday in one of the flats, and I've promised to make dessert. It's time, then to open 'The National Trust book of Traditional Puddings' and choose a dish which will prove to the doubting French that English food can be sublime. And I'll can rest safe in the knowledge that when we get there the lift will work and we won't have to carry it up a dark and desolate staircase to the umpteenth floor!