Mid-week last week and we go back to the Polyclinique 'with' Mr Price's injured thumb. "The twentieth was yesterday, monsieur" the receptionist informs him, but kindly arranges for the specialist to have a look at him.
We have a long wait in a small room, and- wouldn't you know it! the doctor comes in when I'm halfway through sketching a counterful of grim iodine bottles, lint and bandage boxes.
In town later we meet up with our nice neighbour who lives up the hill from us: he's The Only Intellectual in the Village and one of those foppish, rakish bachelors who seem to typify the French male to the British. Thankfully, today he isn't wearing his ridiculous shoes with the elongated and upturned chisel-toes.... I'd have pretended I hadn't noticed him!
He's whiling away the time until the film starts at the cinema opposite.

It's a lovely sunny day as we sit outside Le Café Noir. I draw while the other two talk or discutent, I'm unable to do both as they're different sides of the brain- well, that's my excuse and I'm sticking to it. They discuss world wars, books, music, art and film... and how that man who went by was staring so intently at that lady's bottom.
I'm sketching the bloke at the table just along from me who looks like he based himself on the Gallagher brothers- combat jacket, unshaved, a bit rough. He's sullen and silent and it's only when he gets up and mumbles that he's going to faire pipi that I realise he's with the young woman drinking Coca-Cola opposite .
As we leave we notice a customer with his arm in a sling and yet another in a wheelchair. Indicating his own poor bandaged hand, Mr Price quips "Café des Invalides!" .
Posted by Caroline at 16:41 No comments: 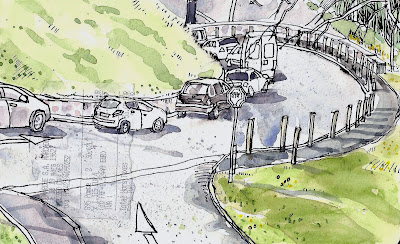 Sunday afternoon.... and Mr.Price somehow manages to run the power drill bit with countersink attachment onto his thumb, while doing a bit of DIY.
Barry Bucknell, for those of us who remember, never told us how to tackle this sort of problem. 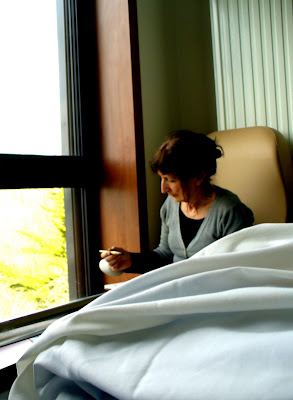 At les Urgences the examining doctor says the tendon's damaged and to come back tomorrow for his colleague to look at it "sur le bloc" and I have visions of a butcher scraping down his lump of wood, wearing one of those bloodied aprons with the bits of meat stuck to it.
There's nowhere to park the next morning when I deliver the grumbling Mr Price to his fate, so I dump him- without time for any fond goodbyes- outside the spanking-new clinic in Léhon.
By the afternoon he's sitting up in bed in a first-floor room wearing a fetchingly inadequate paper gown. "One size fits all!" the nurse had said "We'll see!" said he.
Having to visit the Polyclinique has the compensation of great views- from here you can see across to the ruined Norman castle on its mound, the ancient abbey, and to the nearby medieval town of Dinan with its clocktower .
Sitting down to sketch to while away the time, I'm unable to see quite so far, but I'm delighted to have the challenge of drawing some weird angles- looking down on the parked cars on a steep descending slope, then the distant road beyond, climbing upwards. Of course, as if pre-destined, any car I choose to draw will soon have a hurrying figure approach it with a set of keys.... how selfish and unthinking!
Footnote: Mr. P is now on the mend, but unable to wash up for at least three weeks. 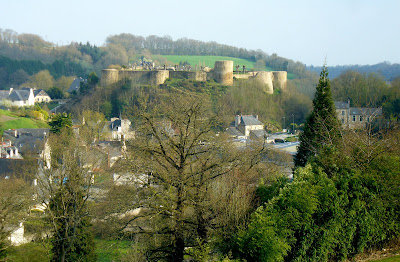 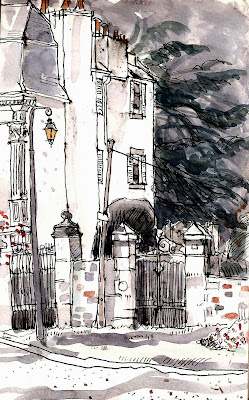 from the Jardin Anglais, Dinan

Brittany has more than its fair share of medieval citadel towns and Dinan's one of them.
For those of you interested in a serious and academic history of the town, I can recommend the excellent French study (!) ' A Few History', which I newly discovered. Well worth a look, believe me!
I quote:

"..in the beginning of the XIIE century a defensive system outline exists, as testifies some Idrish historiengéograph Arab: <>
To this period spaces it closed comprise numerous prairies to feed the cattle and to provide to needs of the population in case of seat." "....During this disturbed period, English not cease to pester the city.."

On a wild and windy day last week, after calling in at the agents in the square to put the house up for sale Mr. Price and I go for a sketch.
From the Jardin Anglais you can look dizzily down onto the long sweep of the viaduct and the port below. Lovely though the vista might be, it's far too blustery to stand by the walls to draw, so we find a bench in the gardens with interesting houses close by. 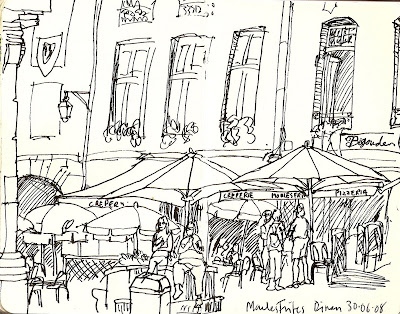 There are tourists about, and schoolkids, and snatches of conversation float on the wind from the adolescent pupils from the college of Les Cordeliers- "I tell you, he wants to go out with you!"
"Well, I don't want!!"
And from two American ladies "... and then we go round the back of the church and then we..." "We already went there!"
After half an hour, it looks like rain, so we pack up and, nicely installed in a warm café in the Place St. Sauveur, wait to order. Then realise the parking ticket's about to time out. Visions of steaming cups of hot chocolate evaporate before us, but by way of compensation on the way home we decide to call in on a nice couple we know.
He makes a great cup of tea and she bakes wonderful cakes- what's not to like?!! 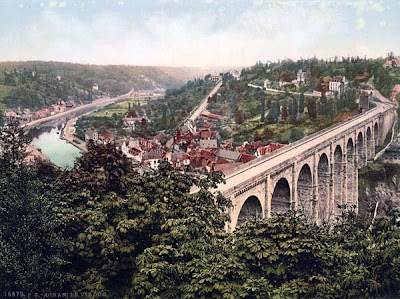