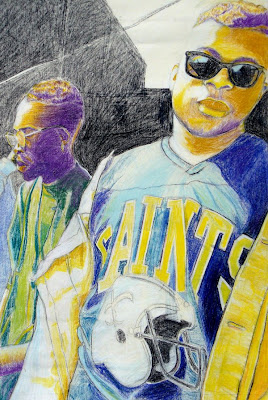 Midsummer means Glastonbury Festival. I've only been once, in 1987, but I now follow the event at home on the telly- with my own 'facilities' in my own bathroom, thank you! 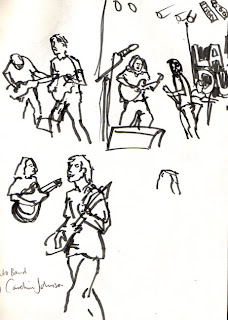 This year, I noticed they have an artist in residence- and have had for years, unbeknown to me. He's Kurt Jackson, who auctions the resulting oeuvres in aid of Oxfam... good on yer, Kurt, I wish there were more like you around.
The World of Rock is familiar territory- my living with a musician, and having to be The Oldest Groupie Ever- gives ample opportunities for sketchbook work.
Drawings of the moving figure can't get too precious and it really sharpens up the eye.
At a concert in Rennes it was too dark to see the page, but the resulting pictures came out lively and amusing.
On a hot summer's evening at St.Malo's La Route Du Rock I struggled among jostling crowd to draw The Spinto Band- a particularly lively group. I was drenched in sweat afterwards- none of it mine, objectionably!
The entertainment business, for that's what it is, is another subject where it's useful and interesting to work from the sometimes-frowned-upon photographic image. And even Degas resorted to this, for his dancers! 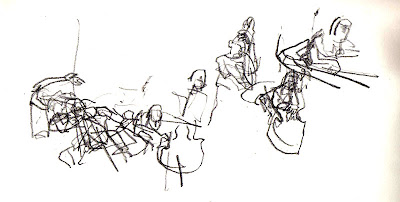 We Shall Draw Them On The Beaches.. 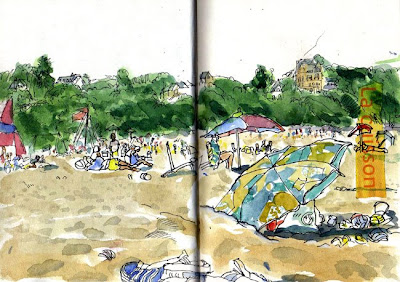 So hot yesterday that a trip to the beautiful Pen-Guen beach just had to be made. 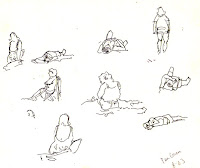 Simply lying on the warm sand gets boring though, so myself and Mr. Price take up our sketchbooks. He draws me from under an umbrella while I , stupidly, don't notice time passing , out in the sun with my sketchbook. Result, a prettily coloured pen, ink and watercolour of sunbathers and beach paraphenalia .... and an ugly red sunburn on my arms and back.
Sand is a pale yellow-ochre-with-a-touch-of-ultramarine and the shadows are less dilute with more of the blue. That's Breton sand of course!
Pic of myself courtesy of ADP. 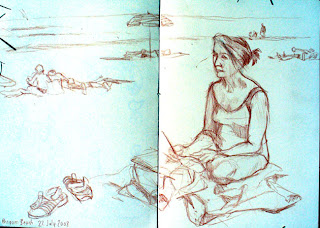 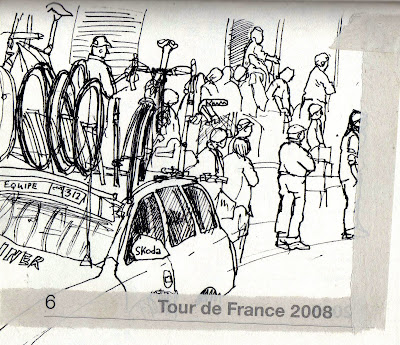 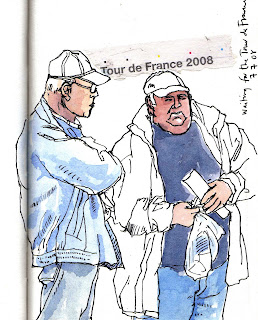 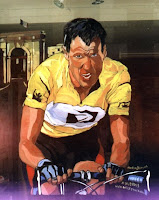 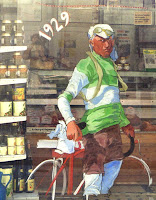 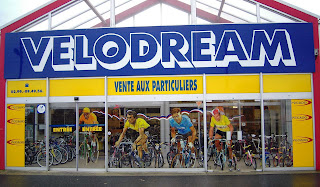 Posted by Caroline at 11:21 No comments: 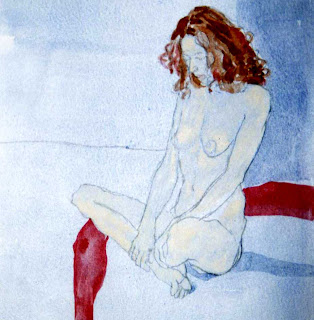 Imagine my delight when I recently sold four small pictures at the Colin Jellicoe Gallery in the heart of Manchester.
These are meagre crumbs from the huge Art Cake... Monet, were he alive, would have a lion's share, what with the £40 million paid at Christies last month for one of his nympheas. Or probably not, as he'd still be painting and gardening, and worth a lot less.
That said, the currently-still-with-us painter Lucien Freud's 'Benefits Supervisor Sleeping' sold at Christies earlier this year for £17 million ... 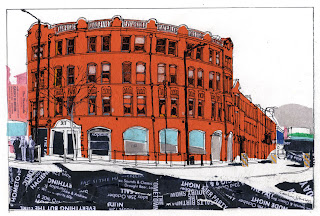 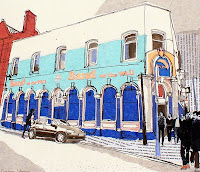 However- as I heard on The Wireless -once we have enough to provide a roof over our heads, warmth and nourishment, then our contentment doesn't get proportionately greater with our spending power- holidays, houses, cars, frocks, fripperies- and do I really want the choice of the mint or the blackcurrant and fig washing up liquid?!! 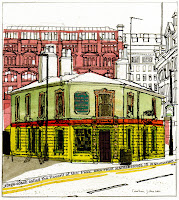 Well, that's what I tell myself, and I'm happy that someone came by a gallery and bought my little 'Nude with the Red Stripe', and then came back for three views of Manchester.
Thank you, Unknown Patron! "May laughter tinkle in your tents and may all your concubines be fruitful"!!
images: Hacienda club, Pevril of the peak, Band on the Wall, nude with red stripe.