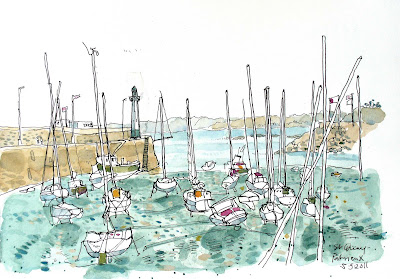 Brittany in September is recuperating from the summer influx of tourists and Parisians.
We drive on quieter roads to see our friend, Yann Lozet, up the coast from here. 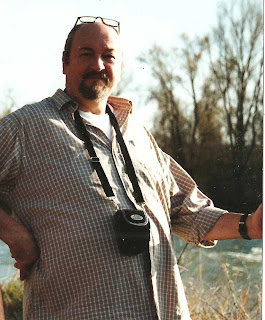 Yann is a true bagpipe-playing, bombarde-blowing Breton, but at six foot eight in height, he's far from 'traditionally built'.
Our connection with his family goes back a very long way.
Before the Second world War, Mr. Price's father was still at school in Wolverhampton and had a French penpal called Christian Savary. When war broke out he heard nothing from him for several years.
Then in 1944 came the sad news from Christians sister, Denise. He'd joined the Resistance movement and had been captured and executed by the Germans in Rennes. 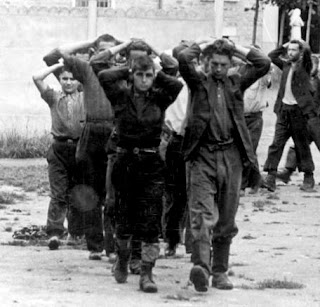 The correspondence continued with Denise, however, for around fifty years.
It's up to us, now, to keep up the contact.
Yann's invited us to see him playing, and, after a spot of sketching before dusk, we find ourselves in a large hall packed with dancers. We're strongly encouraged to join in with the jollifications and after an hour my calves are aching and I'm still confusing the hops, skips and jumps. There are so many different dances, each with its own local versions.... gavottes, ficels, bals and avants-deux.

Hurray, here's a refreshment break. We drink cider and there's chocolate cake. Curiously, in a big earthenware pot, there's rice pudding, which people try bravely to eat from floppy paper plates, until some bright spark produces plastic bowls.
More bewildering dances with some of the throng taking themselves very seriously, and beginners, like ourselves, collapsing in giggles. I bet they don't like that.
It goes on 'til after midnight- how do they do it?! I want to go to bed, but now we're invited to stay on a while here with Yann and the musicians and organisers, and... to his house afterwards.
We drink more cider and eat more cake, and Mr.Price (due to his size) is asked if he's related to Yann, who has to bend double to speak to a lady.
"For once, I wasn't the biggest bloke in the room" he says on the way home, at half-past two in the morning. 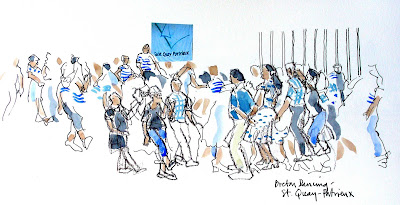 oh this takes me back to a Fest Noz in Callac. The dance floor was empty until the band began to play and then suddenly over a hundred people appeared, joined hands in a circle and we danced until I was weak with exhaustion.

That sounds lovely! Good luck with the knees!

You have such lovely paintings. I added you months ago to my favorites list, and thought I should tell you so. Do you have any sketches of babies? I need one to go along with a story that I'd like to copy from a book and share on my blog. I'd give you credit, of course! I also subscribe to Urbansketchers, and see that you are on there also. My email is nmccarroll@q.com if you would so kindly respond. Thanks much, Nancy

Hallo. I found your blog after googling 'living in finisterre blog'. Yours is clearly the one I should follow - not only great illustrations, observations and information, but you went to Falmouth College of Art. I live in Mawnan Smith and am also an ex student of Falmouth (now called University College Falmouth - no mention of Art!). So I look forward to reading more of your life in Brittany - which is where I, too, would like to live one day. Jane

Nancy,thank you I've emailed you. I only just saw your comment.
Jane, thank you, what a lovely place Falmouth is to be a student- I was there in the Sixties. You're so lucky to live in Mawnan Smith.. we're hoping to sell up soon and move back from Brittany after 18 years.