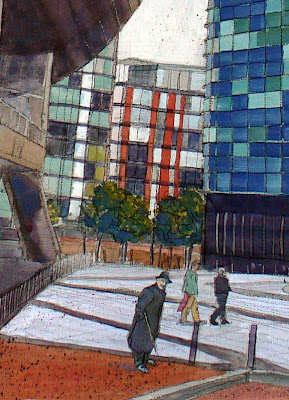 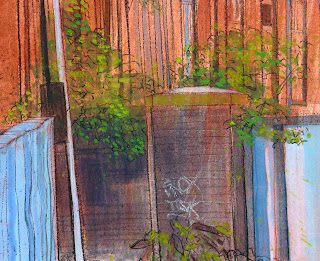 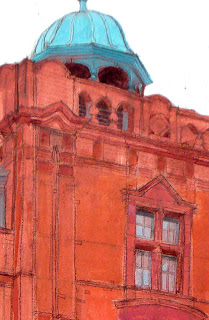 well done, cant wait to see them in situ

Fabulous, as usual. I particularly like the old boy bending slightly and looking to the viewer.

Thanks, Al, and thanks for your support while I hid myself away to do this project- the cheese on toast was particularly delicious! Xx
Dot- pleased you liked them, I'll put up the whole paintings when the work's in situ.
The old fella is LS Lowry and he's outside The Lowry building on Salford Quays- it's a nod and a "thank you!" to him from me.

I like what I see here of them. Look forward to seeing them all later.

Thanks for that, Harry, I like your work and value your comments. Once they're up in the restaurant I'll blog them. Hopefully they'll be in situ around Christmas when I'll be uptNorth and able to (nervously)view them myself- eek!

What a great commission-Well Done! and the work looks really good; will try and go and see it in situ when it's up, and I'm up North visiting the oldies. What sort of scale where they?
Hope things have calmed down a bit for you.
Love Sue E

Hi Sue, and thank you. The images on the blog are just small details of the 'Pizzapics'- they were A2 format and will be at least three times as big when they're up, I was told.
I've naughtily had a couple of weeks off drawing now.. but will get back to it this week as I've found a couple more galleries to take work.
X

What a fantastic job, both the commission and the results. I now need to get up t'North and see the real thing (and have some pizza of course)Well Done x

Why, thank you, Ann!
I'll be seeing them over Christmas. I think free pizzas all round isn't too much to ask- just mention my name-ha-ha!

Great news - do I have to go north, or do they come to a pizzeria near me soon?

It would be lovely to think I'd do some more, but for the moment you'll have to venture a lot further, even, than Watford Gap! They went up last week and the designer sent through some photos of them in situ -which I'll put up on the blog presently. Thank you, James!