'There Ain't No Trees, No Scented Breeze..' 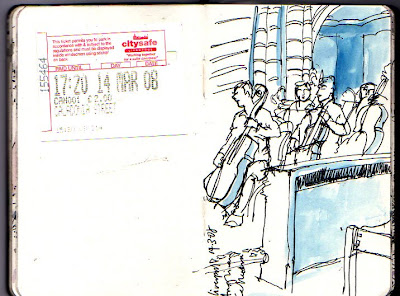 A trip to Liverpool for us usually means a visit to the Tate, but this time is different- ‘someone’s’ discovered that their passport runs out while we’re over, so our itinerary’s based around the nearest parking to the Passport Office.

We have fish and chips for lunch in a run-down pub and I sketch a dodgy bloke who’s telling his mate “..put two blokes in the ground all ready, took all their money” and “..they used to come in with sawn-offs up their sleeves” . 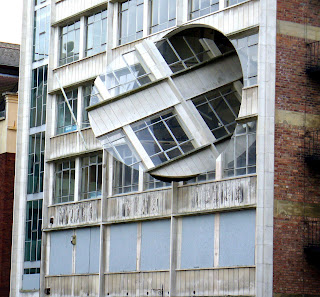 Round the corner from this fine hostelry here’s a great artwork by Richard Wilson (no, ‘I don’t believe it!’ either!) called Turning the Place Over- he’s cut a circular section out of a building façade, and it’s in perpetual motion.

Across the road from the Liver Building and its famous birds is a church which was destroyed in the Blitz, then reconstructed. There’s a touching and unusual sculpture here, to commemorate all those who perished in the bombings… a small boy plays with a toy plane at the top of some stairs; his mother calls him back down to safety.

I’m chucked out of the Passport office for being in possession of a lethal weapon- the penknife in my pencil case- “Either yer leave er we confiscate it an give it the police”. It’s freezing outside and I wait with a scantily dressed young Mum who’s having a fag before she goes in. Her toddler son isn’t dressed for the weather either and keeps telling her “I’m told!” 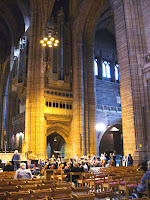 Thence to the Anglican cathedral, via a charming drunkard who keeps us talking for twenty minutes. We’re in luck in the cathedral, however, as there’s a rehearsal going on for the world premier of Karl Jenkins’ ‘Stabat Mater’, providing a moving soundtrack , while we do some quick sketches of the musicians- tiny figures before the vast arched backdrop. We spot the conductor a little while later, in the magnificent Philharmonic pub on Hope Street. It’s a late Victorian gin-palace, Grade 1-listed, and most famous for its ornate, marble urinals and toilets, into which women are allowed as part of a guided tour. 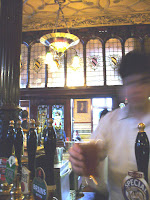 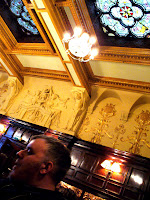 The Philharmonic has dark wood-panelled walls, copper reliefs that depict a musical scene and Art Deco lights that shine onto the mosaic covered floor and bar. The central, horseshoe-shaped bar is awash with ornate stained glass and is notable for its bunches of glass grapes and huge, golden eagle watching over the drinkers. John Lennon famously complained that the price of fame meant 'not being able to go to the Phil for a drink'!

We drive out of the city, finding the motorway via Everton and Knotty Ash. Here are grim streets of run-down shops with metal blinds, and blackened and boarded-up pubs stand lonely on corners, awaiting their fate.

City of culture, but also city of contrast.

Good to know what else you were doing on your trip over!Have shown the moving building to Roger, who with his engineers hat on asked 'was it real'?!, or a piece of something 'arty'. Have just returned from a few days in picturesque Bruges-cold and more opportunities for photos than sketching-(wimp).Will post attempts later. Loved the pigs by the way-didn't get chance to say when we met.
Sue

Thanks for that- I know what you mean about the weather- we'd hoped to get some sketching done by the seaside in Devon, but ran back to the car after taking a few photos on the beach at Beer- roll on summer, if we get one, it's snowing today!