Once Upon a Mural

Once upon a time, and yet not so many years ago…..imagine the delight we felt when we landed a bijou mural job for the exterior wall of a newly- refurbished library or mediatheque in a small town nearby.

I based my design round the history of communication- starting with cave paintings, the first written gospels, Egyptian scrolls, an early printing press, the Bayeux tapestry. From there to famous French writers and artists, dance, song, cinema- from a French viewpoint, naturally, and finishing up in the computer age.

The design was accepted and we got ready to apply the first coat of white primer. We were slightly worried about the surface to be painted- it was very smooth and almost plastic in appearance, so we asked the services technique people at the Town Hall… “No problems!” they replied “The wall was always intended for a mural, and the surface was prepared specially with this in mind.” 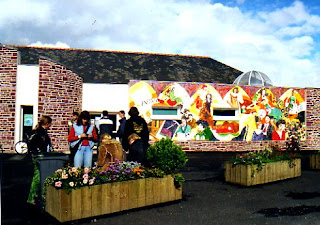 When we’d finished, the mural looked great, we were proud, everyone was pleased, the press came and took notes and pictures. In a month or so there was to be an important ceremony for the twinning of the town with another in Poland. This was to include a grand tour of the library and its bright new artwork, with the Mayor and foreign dignitaries.

We handed in our bill at the Mairie, and, safe in the knowledge that there’d be a nice fat cheque waiting to fill our empty coffers when we returned, we took off to the UK for a couple of weeks.

When we got back home, there was no cheque, just desperate messages on our phone- “concerning the storms we’ve had…. and your fresque”- from the librarian and the Mairie.

With the heavy rain lashing on the surface of our precious creation, the paint was peeling off !

On site, a kindly old man came up and spoke to us. He’d been a painter for the council, he said, and he too had been worried about the surface before we started painting. Exactly as we’d done, he’d been to see the technicians and they likewise reassured him, yet even then he wasn’t entirely convinced.

When the mural had started to peel off, then- and only then- did the Services Techniques look into their file on the library renovations. The surface had been changed from the original specifications. It turns out that the builder who did the brickwork did it in the wrong conditions, which meant that there would be some movement and porosity in the ‘mural wall’. So, what did they do? They covered the whole surface in a plasticated and elastic layer which would accommodate any movement and reject all damp. Including our paint! This was in the architect’s report.

Now here comes the Totally Unfair bit….. as we hadn’t yet been paid, Mr le Maire informed us that we would only get our cheque when we’d done a replacement mural for free- oh, they’d pay for the paint, of course- how generous!

This would represent around two week’s unpaid work for the pair of us . “Don’t cry, Madame” said the Maire, encouragingly…

I went to see our friendly local solicitor who said yes, it was a despicable thing to do, but without our having had a contract, signed by the Town Hall to the effect that the finished mural would be their sole responsibility, we were powerless.

The remains of the mural were blasted off the wall before the big twinning ceremony and all press coverage about the affair was silenced.

A meeting was held to find a base coat for a new mural which would stick to the wall, and a representative from a paint company was listened to, and his super product was chosen- although he was vague about how long it would last .

Then for us the long hard thankless task of re-producing a work of art that we’d already done. And the financial difficulties- the non- payment for the first work actually mean that we had to borrow from a friend to feed ourselves! (Thank you, M.R.)

Despite our misery, our work was helped along by the support of the more reasonable members of the community-

And a concerned local newspaper reporter, who’d been appalled by our treatment by the Powers That Be, said she’d like to do an in-depth exposé of our story and took down the details.

I don’t think this ever went to press because, strangely enough, she died shortly after in a mysterious freak ‘Old Time Cider Making’ accident at the local fete.

Only joking- I made that last bit up!

You should delete that last sentence: Never let the truth get in the way of a good story!