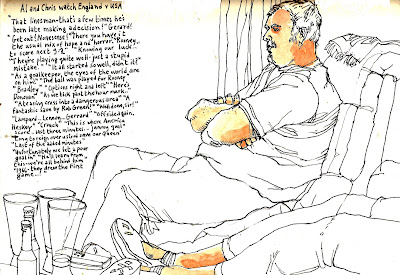 Now, I'm not all that keen on football but I once saw an excellent World Cup Final on a TV in a bar in Chamonix in the French Alps. That was in 1966....back....back in time....... on one side of a long table were the English supporters, and opposite us were the... well you get the picture and I'm not one to gloat. Not here anyway.
It's England versus USA tonight, so to turn our evening into a more positive experience for several people at once I suggest to Mr. Price that we take beer round to an English neighbour, (a keen lady football fan, I assure you!) and watch the game there... thinking I can draw the two of them as they followed the match.
There's just one' jumping-up-and-down -and -shouting- YES!' incident from the pair when England score their only goal, so I can work quite solidly as they sit slumped in their armchairs.
And a convenient space on my picture means I can write down bits of commentary from the TV and from my companions.
Someone's got his jumper on his lap while I'm drawing him and complains bitterly that I've made him look like he has "a massive prolapse or something" so I slap on some white gouache to remedy the offending lump and go over that bit again.
Still not quite right, but it'll do and the match is over and we're off and away home with no other cars to be seen, only the flash of moths and a scurry of rabbits in the limbo of the twilight country lanes.
Posted by Caroline at 15:36