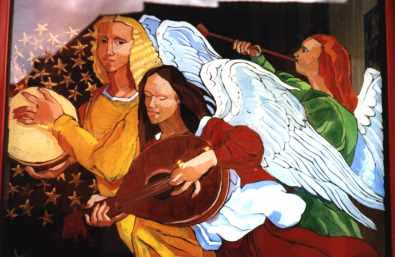 At this time, the mind turns happily to all things festive.
Pity the poor window-painter- not myself this year, but my accomplice, Al. It's one of our busiest times and the red paint's slapped on like nobody's business.
None of our customers wants their shop window decorating too early for Christmas, nor too late, so it's a frenzied period of activity resulting in a sort of madness- a blur of holly, a whirl of snowmen, a sweetness of Nativities, forests of fir trees- and the dreaded favourite, Pere Noel, who, for this stressful period, is often referred to in irreverant and colourful terminology involving size and mother's marital status.
We work from photos and old cards. It's difficult to find a plumptious, white-bearded old fella in a red suit to pose while we paint, and the best-drawn images of Santa are the ones from the old 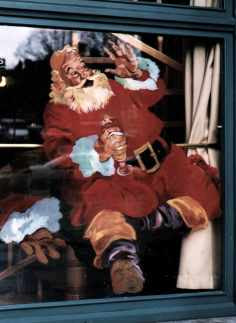 Coca-Cola adverts. The offending bottle in his hand ( no wonder he's fat!) is replaced by a star or a dolly. Or, on last week's pharmacie window, a blood-pressure gauge.
I see that this year, Al's photcopied a picture of Brian Blessed as a possible model.... he'll have to bleach that beard, and add a few extra locks.
Other window painters crawl out of the woodwork around now and we see their handiwork. Some are ok-ish, but bad taste does abound in the city of Rennes. A semi-naked woman dressed as Father Christmas on a bike, smoking a tab somehow lacks the festive ring of Decking the Halls, Awaying in Mangers , and bringing pine logs hither.
And to Slade's perennial questions ' Does he ride a red-nosed reindeer, does he turn up on his sleigh?'- well, 'Yes, if that's what you'd like on your windows, M'sieur, Madame!'
Posted by Caroline at 09:04 No comments: