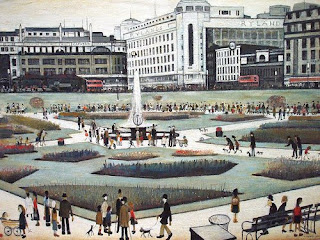 Sometime late in 2006...
An Art job comes through from the excellent Axis Art website. It's the BBC who want North West artists to join Rolf Harris in Manchester for the day. I'm over in France and feel I can't be fussed- then I decide it'll be interesting . I email examples of my Manchester paintings and I'm taken on.
Rolfie's doing a programme on L.S. Lowry, culminating in Piccadilly Gardens, with himself and the chosen artists painting the scene that Lowry depicted in 1954. 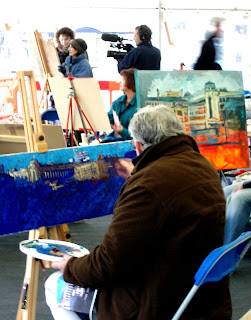 The Beeb give us details of Lowry's palette of colours in case we choose to use the same. That's Prussian Blue, Vermilion, Yellow Ochre, White and Black.
I've never used this combination before and have avoided the all-pervasive Prussian, but when I try them out on test-pieces I'm pleasantly surprised. I leave out the black- 'not colour but the absence of light'.
The results are instant Lowry! I'll use them on the day if they're suitable.

January 2007
All the artists meet the BBC folk in the cafe on Piccadilly Gardens and we're given some idea of how the day will go. We're to be filmed working in a big marquee in front of the building. As we file out , an affable Rolf , swaddled in ten feet of colourful scarf, holds open the door for us.
Out in the open-sided marquee- after Rolf's foot-stomping rendition of 'Sunarise'- no-one can see as much of the scene as Lowry could. A mushrooming of modern buildings pushes us further into the square, so I decide to paint just the slice I can see without scanning.
We have around three or four hours . The BBC and the artists are jolly and friendly, despite the cold, and Rolf's doggedly working on an intensively coloured panorama from photos taken in dramatic evening light.
The artists are working in various mediums- charcoal, oils, acrylics, and - don't ask me how- mosaic and batik!
I meet some nice students from the Fine Art Courses at Manchester Uni. Although we're cordoned off, the public are close by and I loose count of the number of times I hear "Have you guessed what it is yet?" shouted out. But our Rolf's a patient man and poses for endless photos with complete strangers as the day goes by. 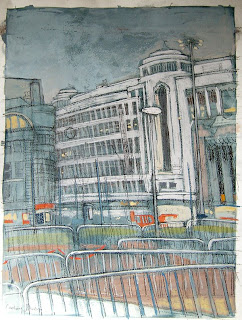 I think it's really naff and embarrassing to have your photo taken with Rolf Harris and I wouldn't ever do that, but later on I think 'well, everyone else is and I might regret it later'- so I do!
All the artists are filmed and interviewed towards the end of the day. It's nerve-wracking and we have to carry on painting as we speak (two different sides of my brain, if you don't mind, Mr. Producer!).
I say my bit, feeling daunted by the previous artist's encyclopedic knowledge of Lowry and I know that my paltry observations won't be chosen.
When the programme goes out in March, they have picked my bit and tho' I look pinched and my voice is cracked and ancient with the cold, I say what I really wanted to point out. I tell how it's easy to paint a beautiful picture of, say, a vase of flowers, but that Lowry depicted the ugly, the everyday and the overlooked, and he transmitted their strange beauty to the observer.
A word about Rolf..... I know he isn't popular with some... well, he's enthusiastic and approachable, and who said Art should be depicted in a po-faced way, to be enjoyed only by intellectuals?! His is one of the few TV programmes showing the craft and technique behind paintings.
There's nothing wrong with being populist, and as a schoolkid I was greatly encouraged by his Big Brush Paintings.. .encouraged down that chosen path to a life of penury- thanks, Rolf, haha!! 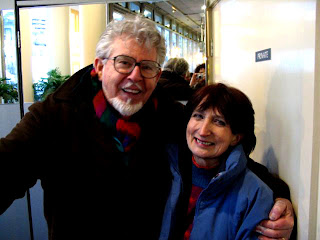 I go through periods of loving Rolf and hating him. My best assessment is that he has popularised art and I guess that is no bad thing. My one small contribution was to take my daughter, then aged 10/11 and her friend to the Saatchi gallery when it was in North London.

The friend soon left with her Mum to go to the West Country. Years later my daughter met her again to discover she had gone to art school as a direct result of visiting the gallery. Till then, she had never realised art could be as weirdly conceptual as the stuff being exhibited.

I love your work. I like the way you have painted the barriers - they engender all sorts of thoughts - with the tiniest piece of imaginative projection you can see the uprights of the barriers as Lowriesque people bearing their collective burden of the crossbar. Perhaps I am being too fanciful.

Thank you, Dot, that's a lovely thought and not at all too fanciful... hadn't thought of that.
I think I was the only artist to draw the 'ugly' barriers... that was what Lowry was about, wasn't it, depicting the warts an'all?
I was quite het-up when I was drawing them, all very psychological! We were cordoned off, and, thinking back, a friend had refused to take part in the event, describing it as the artist seen as 'performing seal'- he's prouder than I am but I know exactly how he feels and I have my own limits.
Another aspect of the barriers might be the difficulty of breaking into a lucrative art market...??

I once interviewed Rolf when I was working at A&I magazine (I think I may be the only person to have interviewed him, the Chapman brothers, Jane Seymour and Lawrence Weiner) and got the idea he could artistically mimic just about anyone (well, apart from the Chapmans and Weiner), but had no voice of his own at all.

He looked a bit surprised when I commented on his painting, saying "Er, and are you going to knock back that bright blue a bit?" !
I was amused by the article in A&I which suggested his portrait of The Queen bore an uncanny resemblance to himself...