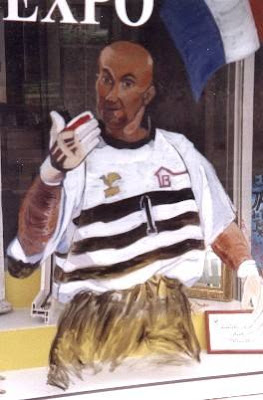 Painting a window is hard work both mentally and physically, and is usually done in three to four hours.
In the lead up to football's World Cup, held in France in 1998, we had eight-six window portraits of players to paint, that's an intimidating forty-three each.
Such a huge amount of portrait work was an unique opportunity to hone our craft- and my 'own work' in the studio can only have benefited, despite at times feeling drained and distraught !
I compare this to the Beatle's arduous training in the clubs in Hamburg, although there the resemblance ends- not many 'prellies' available in the average Breton village, to enable the artist to stay awake and continue working!
I would hesitate, to their faces that is, to call the French an over-self-confident race of people... but we portrayed Zidane holding the cup on more than one window, before the matches began. After they won, we were able to say it was due to our paintings!
I could, in fact, visualise a direct parallel to the sympathetic magic practised in prehistoric cave art and other rituals up to and including the present day!
Mmm...... could be a lucrative service we could offer, perhaps we've been barking up the wrong tree..
'Miraculous Good Luck Paintings- they worked for the French, now let them work for you! Commissions taken in strict discretion.'
Picture:Barthez in goal, window in Plancoet.
Posted by Caroline at 15:26